A 9-year-old was attacked by two dogs while playing on a trampoline at a friend’s house, causing terrible injuries all over his body.

According to a GoFundMe campaign set up to help raise money for the family’s medical needs, the incident happened in October in White Lake Township, Michigan. The youngster, Hunter Heater, suffered “serious lacerations and cuts” a few inches from the main arteries.

The dogs bit him 75 times throughout his chest, just avoiding his jugular vein and windpipe. Fortunately, the youngster was treated quickly and taken to hospital by paramedics.

“It’s a vision I’ll never forget,” the boy’s mother, Rachel Heater, told WJBK. “Her skin was hanging down and you could see her skull and her artery in her neck.”

The medical staff stabilized the youngster and began treating his injuries when he arrived at the hospital. 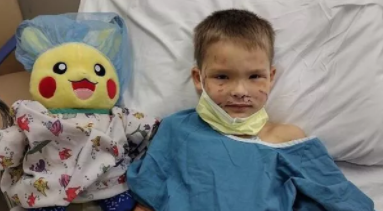 The child needed 200 stitches on his arms, face, legs and neck, as well as more than 40 staples in his skull, during six hours of operation.

Surgeons had to reattach the muscles in his leg and arm, and he suffered numerous skull fractures in the temporal bone behind his left ear, according to the GoFundMe page.

“His favorite color was red; he can’t look at red. He can’t eat hot dogs, which were his favorite, because it reminds him of dogs that eat him,” his mother told WJBK.

The family’s medical expenses are increasing, according to WJBK, and they have to pay for everything out of pocket. So far, the GoFundMe campaign has raised over $ 9,600, with a goal of $ 10,000.

“The medical bills are huge right now, and the family and Hunter need your support,” organizers said. “All donations go directly to Hunter’s medical expenses and recovery.”

Dog attacks in the United States

In the United States alone, there are over 52,000,000 dogs. A dog is kept as a pet in about a third of all households. It’s no surprise that there are so many dog ​​attacks every year, given the number of dogs that share our lives and our living space. According to the Atlanta Centers for Disease Control (CDC), approximately 800,000 dog bites require medical treatment each year. Even more incredible is the fact that 334,000 of them are severe enough to require hospitalization.

Children represent more than half of dog bite victims. While only 12% of adults need medical attention, 26% of all young people need a trip to the emergency room or a visit to the doctor. The victim’s home is the most likely location for the attack. The second most likely location is the victim’s friend’s house. Seventy-seven percent of biting dogs are owned by a victim’s family member, relative or acquaintance.

Dog bites are a bigger health problem for children than measles, mumps and whooping cough combined, according to the CDC. They are more common than bicycle crashes, playground injuries, moped, skateboard or mountain bike crashes. Every year, dog bite treatment expenses exceed $ 1 billion. Boys aged 5 to 9 are the most common victims, while young people, in general, are commonly bitten on the face, neck and head.

Also read: Which breed of dog matches your personality?

For the most recent updates from the animal kingdom, be sure to follow Nature World News!

© 2021 NatureWorldNews.com All rights reserved. Do not reproduce without permission.

Who owns the pet when you separate?